One of the community submitted feature requests was for keyboard shortcuts for the CKSDev menu items. Tobias Zimmergren raised a good suggestion that rather than use the established WSPBuilder versions it would be preferable to use a new set. This makes perfect sense as we always aim for CKSDev to play nice with other extensions.

The job was made easier as Carsten is part of the CKSDev team as well as the author of WSPBuilder so he was able to point me in the direction of the existing WSPBuilder shortcuts.

Wictor Wilén suggested some alternative shortcuts which are:

Armed with the proposed shortcuts I set out to implement them into the codebase. The VSPackage infrastructure provides a declarative method to define shortcuts. The ‘vsct’ file is where the magic happens. What you have to add are the KeyBinding elements with the relevant information. The KeyBinding element defines the command to associate the keys too, the editor type (The value for the default Visual Studio editor is “guidVSStd97”) and the keys combined to form the shortcut. The image below gives a couple of examples for the ‘Attach to processes’ commands. 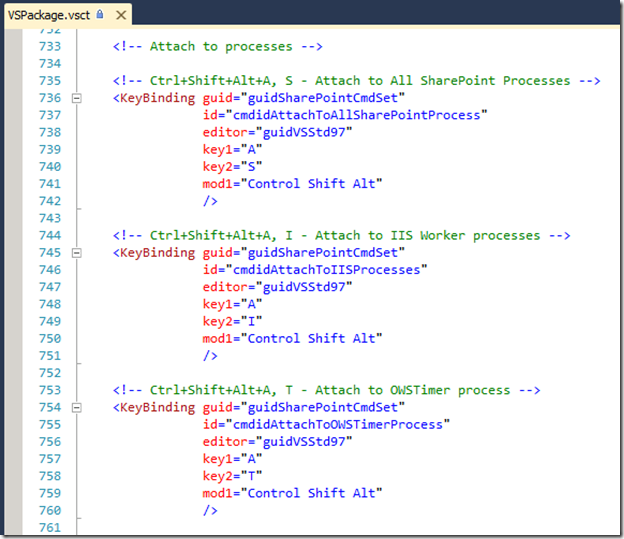 The commands are already implemented and registered in the ‘EventHandlerManager’ class. The key bindings will invoke the same logic as the menu item clicks. There is also a really good blog post by DotNeteers which provides lots of walkthrough information about the VSPackage vsct file and the capabilities within it.

Due to the fact there are several commands which appear on different menu structures I had to introduce some kind of consistent second key stroke mapping:

So the way it’ll map is

These new shortcuts will be available with the release of version 1.2 which is available soon.